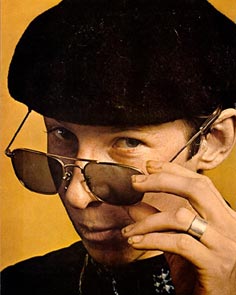 UPDATE - October 1, 2004: John Einarson, biographer of the Buffalo Springfield, has reported that Bruce Palmer has died of a heart attack at age 58.

Neil Young told author Jimmy McDonough in the book "Shakey": "Bruce was great. Bruce was one of the best guitar players I've ever heard in my life."

"Bruce would lay down a groove and we could have done anything," said Stills, acknowledging Palmer's prowess.

"There's not a person who listened to the Buffalo Springfield that wasn't drawn to the way he played bass," said bandmate Richie Furay. "He made the music move -- Bruce was truly a musician's musician. I consider it a privilege to have played with him in such a creative time in my life."

"He was the focus that balanced Neil and me." Atlantic Records chief Ahmet Ertegun claimed that Palmer was "a musical guru. The rest of the band all idolised him."

"I have to this day never played with a bass player as good as Bruce", said Mynah Birds drummer Rickman Mason on their Motown recordings in 1966.

Bruce Palmer was born in 1946, in Nova Scotia, Canada, and was most well known as the bassist for the Buffalo Springfield. Palmer began his musical career in Toronto with Jack London & the Sparrows.

Bruce Palmer was with Neil Young for the legendary meeting on Sunset Boulevard in Los Angeles with Stephen Stills and Richie Furay. On the way out of town, Stills recognized Young's hearse with Canadian plates and flagged them down. The rest is history, as they began jamming immediately and formed the Buffalo Springfield.

From The Buffalo Springfield Story:

"But within weeks of Buffalo Springfield forming, a less welcome development entered into Neil Young's life. He and Bruce Palmer were stoned, standing in a small crowd watching a man demonstrating a Vegematic kitchen slicer when Neil collapsed. He was having his first epileptic fit, a condition whose medical treatment only enhanced his moody and intense personality: simultaneous (such were the times) self-medication of dope,speed and acid didn`t help. His two songs on the self titled first Buffalo Springfield LP, 'Flying On The Ground Is Wrong' and 'Burned' alluded to bad trips-unusual in an era of psychedelic celebration."

Joining Neil Young and Stephen Stills in the Buffalo Springfield would be the brief highlight of his career.Palmer was replaced by Jim Messina on bass due to a variety of drug problems and immigration issues. "Bruce was the mysterious one in the group," Furay adds. "You may not have always known what he was thinking as he just looked at you and smiled, but when he plugged the bass in, there was no mistaking his life was truly about the music."

Neil Young continued about Palmer in the book "Shakey": "I think I met Bruce down at David Rea's apartment below the Riverboat (Toronto). [He played] blues guitar. Neither Stephen or I played guitar half as well as Bruce. But he didn't play guitar -- he played bass. Bruce used to sing and play, and it was funky as hell. Funky blues man. He had an old Kay. He can still play the blues, just like that."

Otherwise, Palmer's only other musical effort was a solo album, "The Cycle Is Complete", an experimental album. Palmer briefly formed the band Buffalo Springfield revisited but there was little output from the brief reunion band that was without Young and Stills.

A book on the Mynah Birds by their drummer Rickman Mason is planned to be released.